Consciousness and its disorders are among the biggest challenges in neuroscience. Researchers are now combining state of the art experimental science and new computational methods to make new progress: Clinical scientists of the Human Brain Project established methods to assess levels of consciousness directly from brain activity. Now, advanced computational brain models running on EBRAINS help to understand complex underlying mechanisms across different levels in the brain. The models were systematically built from brain data and encompass the microscale of neurons up to whole-brain dynamics. With new clinical methods and advanced brain modelling converging for the first time, the EBRAINS-powered work ultimately aims to improve diagnostics and personalized treatment for patients. 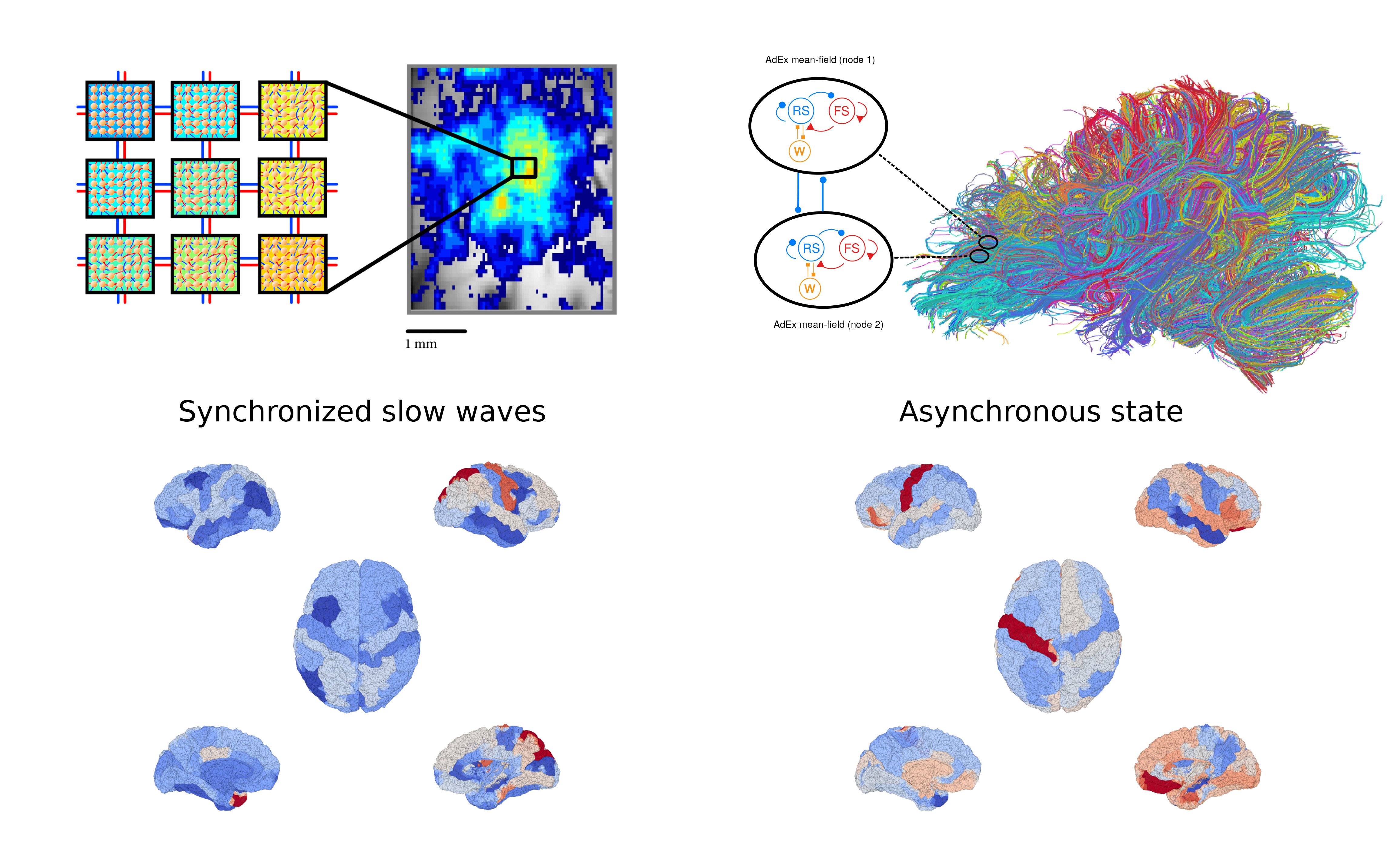 Understanding how network activity in the brain generates different states of consciousness is a major challenge – with implications for the clinic. Every year, millions of patients are sent to emergency services after loss of consciousness following a brain injury, e.g. from accidents or a stroke. Treating these patients and assessing their inner state is difficult. “We need to make sure not to miss it when a person is minimally conscious and potentially able to recover”, says Marcello Massimini, a medical doctor and Professor at the University of Milan who works in the Human Brain Project (HBP). “But you can’t know from behavioral responses alone in these cases, you have to look at the brain.”

An objective measure of consciousness

Over the years, scientists have gathered an increasingly comprehensive view of the brain activity in different states of consciousness. “We can see that unconsciousness is not simply a matter of a loss of brain activity”, Massimini says. “It’s not necessarily weaker. But it is a lot less complex.” Starting from this observation, the scientist and his team have devised a method for an objective brain-based measure of consciousness levels, called PCI, or Perturbational Complexity Index.

The approach relies on applying a strong magnetic pulse to a small brain region, which make the neurons fire, and simultaneously recording of the overall brain response. The complexity of the brain waves is then calculated. As the scientists have shown in awake, sleeping, anesthetized subjects, as well as in patient studies, the resulting values are suitable to assess the consciousness level of a person.

But to drive approaches like this further, refine and calibrate them towards routine use, a deeper understanding of the measured data is necessary. As the brain response builds up across very different levels in the network – from the level of neurons up to the whole brain – there is no way experimentally look at everything at the same time. For this, computational models are needed that integrate data across these different scales, and that can simulate and predict the dynamics.

On EBRAINS, this is now becoming available: While Massimini was developing methods in the lab, HBP-scientists Alain Destexhe and Jennifer Goldman at CNRS and Paris-Saclay University were creating models of the brain networks associated with different states of consciousness, systematically connecting the microlevel of nerve cells, the intermediate-scale of neuronal circuits, and the whole brain-scale.

The first two states that were modelled are wakefulness and slow-wave sleep. The theorists used high-quality data to build network models from the ground up. “When you look at these states in the brain, there are a number of measurable characteristics that are different” explains Alain Destexhe. “From the firing behaviour of the individual neurons, which are relatively synchronized in sleep and asynchronous in the awake state, to large whole-brain phenomena, like synchronized slow activity waves that emerge as a result.”

To build the neuronal level, recordings from microelectrodes became the basis of spiking neural network models. Next was the level of neural populations, corresponding to what is measured with larger scale, lower-resolution methods. This level was captured in so called mean-field models, each representative of a tiny area of brain tissue, which were then connected based on micro-circuit connectivity data. “This allowed to model a larger brain area, where the units are each described as a mean-field, like a pixel in a camera”, Destexhe explains. Finally, the team was ready to approach the whole brain level, integrating the elements into a network constrained by the entire human connectome, with the simulation engine The Virtual Brain (TVB). The EBRAINS-powered TVB allows to model and predict activity in the whole brain, and can be adapted to the brain of an individual patient.

Using the Virtual Brain allowed to simulate wake- and sleep-like states of the brain, for the very first time, at the level of the entire human brain. When the model is put in motion, it exhibits the patterns that are typical for both brain states, without them being programmed in, as well as and transitions between the two states. Besides observing spontaneously emerging activity, it is also possible to stimulate the network, like a clinician using the PCI-assessment would do for a patient.

Detailed analysis of the dynamics can be accessed at any point of the simulation, from the single neuronal node, up to individual regions and the whole brain, providing a range of different types of modalities commonly measured in the lab.

“The big difference is that we see every element in the model”, explains Jennifer Goldman. “We can look at very fast and very slow processes, small and very large-scale phenomena, all in connection to each other, without typical limitations of the experimental equipment. You don’t get that type of resolution in time and space, on all scales at once”.

“It’s a true multiscale approach to the brain, which is unique”, says Massimini. If you combine high-quality data from the clinic with this multiscale model on EBRAINS, that is a way forward.”

Over the next two years, the models will be expanded to reflect brain dynamics in abnormal states of consciousness, such as coma and in different levels of anesthesia, to study the changing responsiveness of the network “With EBRAINS we make these models accessible to the wider community. Anyone can run it, vary parameters and generate their own analysis”, says Desthexe.

“Ultimately what we’d like to be able to do is make personalized models, Goldman says. So if somebody is in a coma, we can make a model of their brain, and see what it would take to potentially wake them up. For me, that’s the whole goal, personalized medicine.”

The Human Brain Project (HBP) is the largest brain science project in Europe and stands among the biggest research projects ever funded by the European Union. At the interface of neuroscience and information technology, the HBP investigates the brain and its diseases with the help of highly advanced methods from computing, neuroinformatics and artificial intelligence, and drives innovation in fields like brain-inspired computing and neurorobotics.

EBRAINS is a new digital research infrastructure, created by the EU-funded Human Brain Project, to foster brain-related research and to help translate the latest scientific discoveries into innovation in medicine and industry, for the benefit of patients and society.

It draws on cutting-edge neuroscience and offers an extensive range of brain data sets, a multilevel brain atlas, modelling and simulation tools, easy access to high-performance computing resources and to robotics and neuromorphic platforms.

All academic researchers have open access to EBRAINS’ state-of-the art services. Industry researchers are also very welcome to use the platform under specific agreements. For more information about EBRAINS, please contact us at info@ebrains.eu or visit www.ebrains.eu.